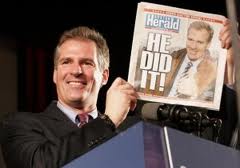 Sen. Brown shocked the political world by winning Massachusetts’ Senate seat as the Republican nominee early last year. He will be signing copies of his newly-released book, Against All Odds: My Life of Hardship, Fast Breaks, and Second Chances. All tickets and sponsorships include a copy of Against All Odds.

The Chairman’s Book Club event on Monday, June 20, from 7 pm to 9 pm at the law offices of Mark S. Allen, 111 Oronoco St. in Old Town Alexandria.

Critical Acclaim for Against All Odds

“Powerful stuff. . . .This isn’t your typical memoir. It is brutally honest, difficult to read, and important.”

“A fresh, compelling memoir of a childhood that could have led to a miserable life, but didn’t. . . .Brown’s straightforward narrative makes for a good read.”

— The New York Review of Books

“Dramatic. . . . Poignant. . . . Scott Brown’s life could have veered horribly wrong so many times, as he amply demonstrates in his disquieting memoir. . . . A reader will get an everything’s-finally-right-with-the-world thrill from his success in life.

Thanks to Our Supporters