We mourn the passing of Helen Blackwell, a lifelong Republican and former member of the 8th District Republican Committee. Please find below her obituary and details on funeral services this upcoming weekend. 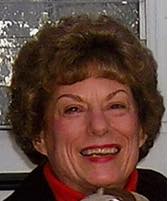 Mrs. Blackwell was a tireless champion for her principles. She served as the Virginia State Chairman of Phyllis Schlafly’s Eagle Forum for 25 years and, for many years, wrote a regular, national newsletter, “News and Notes” for Eagle Forum. She was also director of the Virginia Conservative Alliance and the Voting Integrity Project, of which she was the original chairman.

A dedicated political activist, Mrs. Blackwell was elected chairman of the Arlington County, Virginia Republican Committee three times and was the Republican captain of the Lyon Village precinct in Arlington for 41 years. She served on the State Central Committee of the Republican Party of Virginia and was a Delegate from Virginia to a Republican National Convention.

Virginia Governor Jim Gilmore appointed Mrs. Blackwell to the Board of Visitors for James Madison University; she served in that role from July 1999 to June 2004.

Mrs. Blackwell was born in Baton Rouge, Louisiana. She attended one year at Randolph-Macon Woman’s College and received her B.A. in History of Art and M.B.A., both from Louisiana State University, where she was the co-founder and secretary of Students for Conservative Government. She spent a year of post-graduate studies in art at the University of Illinois (Champaign-Urbana). She was a volunteer docent for many years at the National Gallery of Art. Since 1972, she resided with her family in Arlington, Virginia. She was an active member of Columbia Baptist Church in Falls Church and the Eleanor Wilson Chapter of the D.A.R.

Mrs. Blackwell was a beloved wife, mother, and grandmother. She is survived by Morton, her husband of 47 years, her sons Charles Attaway and William Blackwell, her daughter-in-law Wendy, and two grandchildren, Isabel and Paxton Blackwell.

Visitation will be held on Friday, September 13 from 5:00 pm to 8:00 pm at Advent Funeral & Cremation Services (7211 Lee Highway, adventfuneral.com) in Falls Church.

The funeral service will be held on Saturday, September 14 at 11:00 am at Columbia Baptist Church at 103 West Columbia Street in Falls Church. A graveside ceremony will follow immediately at Columbia Gardens Cemetery at 3411 Arlington Boulevard in Arlington.

In lieu of flowers, contributions may be sent to the Leadership Institute or to Columbia Baptist Church.